Bars and restaurant owners welcomed the second round of Anti-Epidemic Fund worth HK$137.5 billion. At the same time, they cast doubts on the effectiveness of the mandatory closure of drinking venues for two weeks starting at 6 pm on April 3, which has been extended to May 7, as a measure to contain the spread of coronavirus.

Hong Kong lawmakers have approved the bailout fund in April as an extension of an HK$30 billion Anti-Epidemic Fund announced in February and on top of the HK$120 billion relief package unveiled in the 2020/21 Budget. The government hopes these measures could facilitate the city’s economic recovery and help businesses to stay afloat.

The relief packages would be timely rain to many in the food and beverage sector while the bar industry accused officials of singling it out by ordering bars and pubs to close temporary to combat a surge of coronavirus infections that was fuelled mainly by imported cases.

“Why only us? I don’t think alcohol ban will work,” said Chan Yiu-keung, a bar owner aged 39. Mr Chan said, “It’s better to apply border shutdowns at the beginning of the outbreak.”

However, Secretary for Food and Health Sophia Chan Siu-chee said in a press conference that the shutdown was needed given that 69 local Covid-19 cases involved visits to bars or pubs. The number of confirmed cases linked to bars, or the so-called nightlife cluster of infections, later rose to 103.

The two-week closure was later extended for another two weeks until May 7.

The ban is not only affecting bars and pubs but also hits restaurants that owned liquor licences.

Lee Cheuk-wing, 36, owner of a Japanese restaurant, also had reservations about the closure arrangement. “Mrs Lam (The Chief Executive) has already implemented social distancing rules, and I don’t think the new closure measurement will help a lot.”

Before the ban on drinking venues, the government had ordered strict measures to enforce social distancing. Restaurants are required to ensure a distance of at least 1.5 meters between tables; limit the number of diners at each table to four; serve only 50 per cent of normal seating capacity; check customers’ temperature and provide hand sanitizer.

Ms Lee also said the alcohol ban had further threatened her business. “We are still open but not selling alcoholic beverages now. Originally, alcohol beverages contributed around 30 per cent to my business.”

Bars and eateries benefit from the government’s relief packages

Social distancing rules and the closure order dealt another heavy blow to the city’s food and beverage industry which had been battered by the anti-government protests in the second half of 2019.

In the fourth quarter, the value of total receipts of restaurants fell 14.4 per cent year-on-year to HK$26,001.3 million. This marked the most significant drop since the outbreak of SARS in the second quarter of 2003.

However, bars and eateries are among the businesses set to benefit from the government’s relief packages.

Under these packages, licensees of the catering sector can either apply for the Employment Support Scheme (ESS) or one-off subsidy; meanwhile bars, pubs and clubs directed by the government to close temporarily are eligible for a further one-time subsidy of HK$50,000.

The ESS is one of the schemes under the second phase of Anti-Epidemic Fund, and it will last for six months. The scheme is calculated based on 50 per cent of wage with the maximum subsidy capped at HK$9,000 per month. Employers cannot implement redundancy if they are applying this scheme.

The wage subsidies scheme aims to retain jobs amid the rise of the unemployment rate in Hong Kong. According to the latest official figures, the unemployment rate hit a new high of 4.2 per cent in more than nine years, and the pandemic is expected to have a further impact on the labour market.

“The labour market will continue to face significant pressure from the economic fallout arising from the pandemic in the near term,” Secretary for Labour and Welfare Law Chi-kwong said in a statement.

Ms Lee said she prefers to apply the ESS because the scheme can help to retain her staff.

“I think it can help,” she said, “Due to the previous social distancing measures, there are fewer customers, so I have asked some staff to take no-pay leave. Now, this measure can stimulate my business.”

Wong Yuen-sum, 20, a part-time staff who works at Ms Lee’s restaurant, welcomed the scheme. “Under this scheme, my job is temporarily secured,” she said. “It can ease my boss’s financial burdens as well.”

The one-off subsidy ranges from HK$250,000 to HK$2.2 million, based on the size of the catering outlets’ premises. Licensees are required to use not less the 80 per cent of the subsidy to pay the salaries, and they can’t implement redundancy of staff for three months after obtaining the subsidy.

Mr Chan said the subsidy could stimulate his business.

“Under two weeks of closure, we still need to pay the rent. This subsidy can compensate part of the rent and business income,” he said. Same to other bars, pubs, and clubs that required to close for two weeks, Mr Chan is eligible for a further one-off subsidy of HK$50,000. “Although it can’t cover all the loss, it’s better than nothing,” he said. 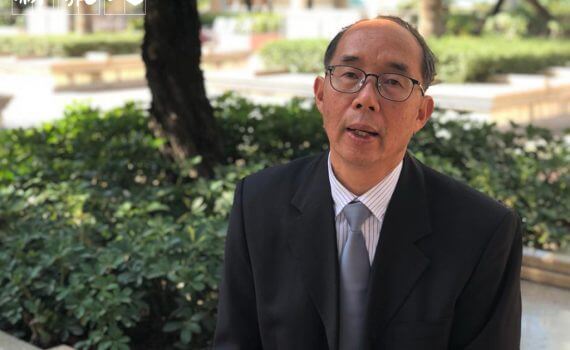